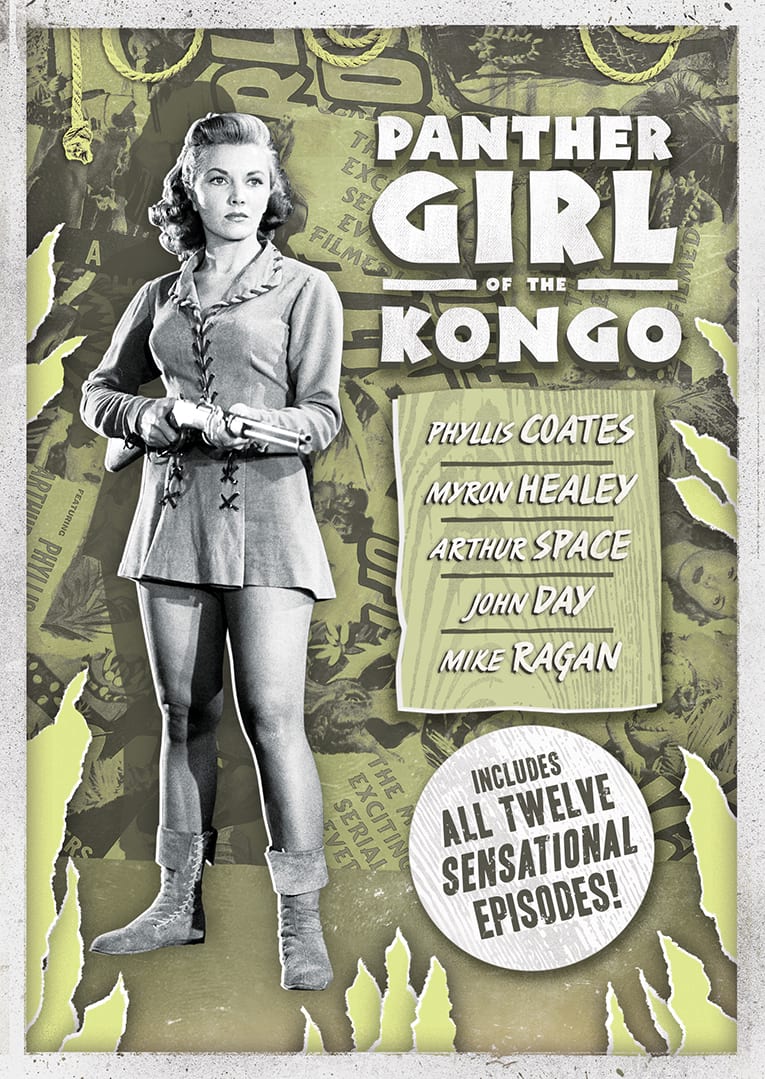 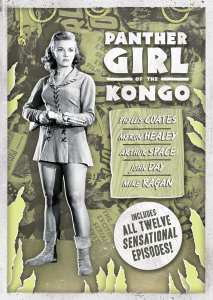 Olive Films has done a masterful job of releasing Republic’s penultimate movie serial (the final and 66th one, KING OF THE CARNIVAL, was released later in 1955). 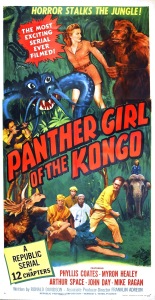 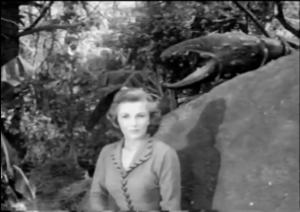 To stretch their budget, Republic had star Phyllis Coates (Lois Lane for the first season of T.V.’s ADVENTURES OF SUPERMAN (Motion Pictures for Television,1952) wear the same outfit as Frances Gifford wore in the earlier 22nd Republic serial JUNGLE GIRL (1941) and a lot of footage was lifted from this earlier serial. By the way,14 years earlier the 15-chapter JUNGLE GIRL had cost $177,404!!

Jean Evans is a jungle adventurer who is handy with both a rifle and a camera. Due to a past incident wherein she saved the village, the Utanga tribe refer to her as Panther GIRL (Ms. Coates, who is still alive today at age 90, was 28 at the time.). While out on a photo shoot for a foundation, they spy some very large crustaceans. The natives suggest she get Larry Sanders (Myron Healey in a rare good guy role), a great white hunter. 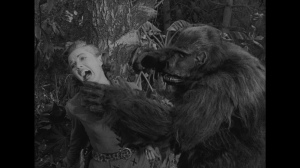 Evil chemist Dr. Morgan (Arthur Space, a nicer doctor on T.V.’s LASSIE (20th Century Fox,1954-71)) has discovered an abandoned gold mine in the area is full of diamonds (when life gives you lemons….) which he covets. To scare of the natives and interlopers, he has developed is “hormone compound “(steroid abuse even then??) to turn ordinary crawfish into the giant ‘Devil Beasts”. 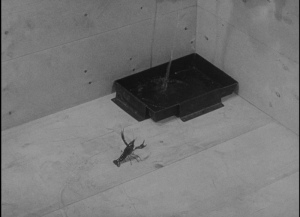 Since the monsters do not scare off Evans and Sanders, Dr Morgan enlists human goons Cass (character actor John Day) & Rand (Mike Ragan, more commonly seen in westerns) who use the personal touch of shooting at, and knock down fights with Sanders, with heroine often knocked out or tied up. 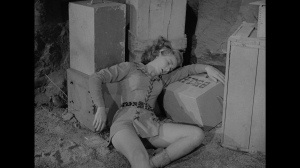 The Lydecker Brothers, wizards of special effects, did what they could to make crawfish look gigantic. Mostly it involved the hard-shelled stars on miniature sets or people against rear screen projections. The interaction involves one giant claw reaching from above rocks of from off frame to grab Panther Girl or some poor native. I wonder if Roger Corman somehow got it and used the claw for his late ATTACK OF THE CRAB MONSTERS(A.A.,1957). Probably inspired by the giant ants in THEM! (WB,1954), these creatures also have a mighty roar. Bert I Gordon must have studied this serial, as many of his effects seem to be inspired by the techniques used here (his first film KING DINOSAUR, Lippert,1955, used a lizard magnified via rear projection and double exposure). 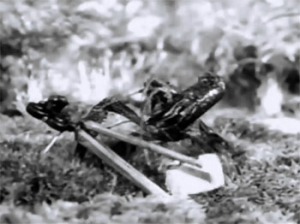 What is interesting for a film of the period is that there is no romance between the two leads. Maybe the studio felt that the youngsters would not put up with “icky kissing” getting in the way of the monsters, fistfights, and perils. The villain, too, is not out to rule the world as many serial villains seemed to be trying to attempt, but was motivated by old fashioned greed. 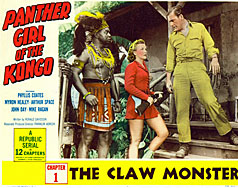 What does date the film in many cringe worthy ways are its portrayal of the natives. Easily frightened and superstitious, they are often reliant on the white actors to protect them. They speak in pidgin English, and another tribe (The Returi) is bribed to attack the heroes after being bribed by an elixir (alcohol!). 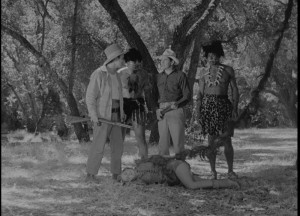 Plus, for the title character, Panther Girl seems to spend a lot of time tied up, screaming, or knocked out while Sanders punches and shoots his way out of the situation. She is also grabbed by the claw at one point and later ape handled by a murderous gorilla (ape specialist Steve Calvert). A lot of Jean Evans‘ action are lifts from JUNGLE GIRL of her swinging from vines and riding an elephant. She does save Sanders (the name maybe a reference to “Sanders of The River” by Edgar Wallace (U.K. first edition by Ward, Lock & Co. (1911))?) from quicksand*, so she is not completely unhelpful. 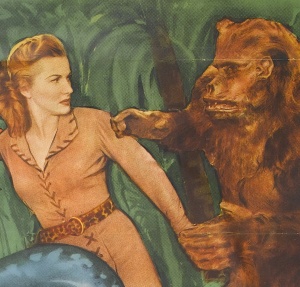 The production has a very studio bound feel to it, like many television productions of the time. Republic, through its subsidiary, Hollywood Television Service, had been involved with the earlier COMMANDO CODY (1953). The 12-part serial had been originally envisioned as a television series with each chapter running about 25 minutes. The serial finally aired on NBC television in 1955, the year PANTHER GIRL OF THE KONGO was released. One wonders if this too was planned as a television series? 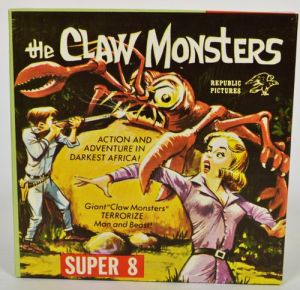 During the 1950s up to the 1970s, movie serials, especially those from Republic, were aired on television regularly. In 1966, it was edited into a 100-minute feature called THE CLAW MONSTERS. When Super 8 home theatre came out, it was released in silent and sound edits. In the 1990s, they started to receive less air time. The home video market kept the titles out in front of fans for many years thereafter, but few have been released in their entirety on DVD and Blu Ray. 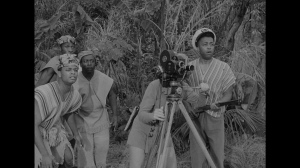 The print quality is of the high standard we have come to expect from Olive Films. The picture is quite sharp with few blemishes. The sound is DTS-HD Master 2.0, though the sound has not been remixed to make use of the new sound systems but instead is a clear replica of the original track. The optional yellow English subtitles are very legible and follow the dialogue and action. 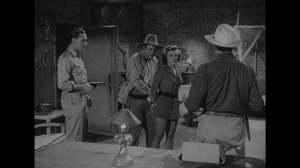 Oddly, there were no extras, not even a trailer. It is a shame, as the trailer is unique, with the star narrating part of it before an announcer takes over: 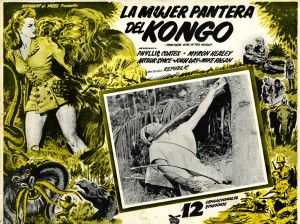 For fans of Republic Serials or the lovely Phyllis Coates, this is one you will want to add to your collection. 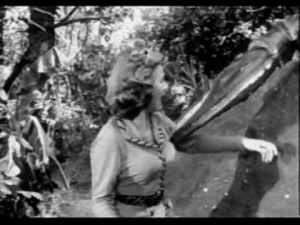 *- Coates once recalled in an interview that after filming in the swamp, Healey insisted the two of them go get penicillin shots!

No animals were harmed during the making of the film, though I assume many of the monsters met a boiling pot of water for the wrap party . 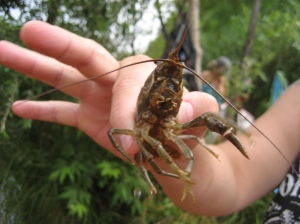