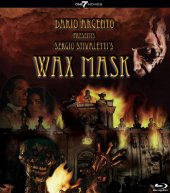 THE WAX MASK is a wonderful throwback to the Italian Gothic Horrors of the 1960s, mixed in with considerably more graphic gore and nudity as was more permissible in 1997 when this film was made.

Dario Argento, the reigning king of Euro Horror ,had tried for a year to raise funds to produce a film to be directed by Lucio Fulci. Fulci , who had his own niche in gory Italian horror (ZOMBI 2, aka ZOMBIE ,1979) ,had fallen out favor ,due to lending his name to projects that he was not involved with ,as well as Fulci being ill at various times from the early 1980s .

At first, they had thought of an update of THE MUMMY (Universal,1932) before deciding on a semi remake of HOUSE OF WAX(WB,1953, itself a remake of the 1933 WB classic MYSTERY OF THE WAX MUSEUM) .Fulci wrote a screenplay ,but more delays occurred due to Argento’s THE STENDAHL SYNDROME (1996.) 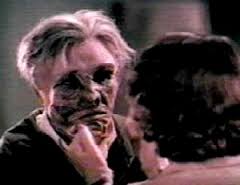 Mystery Of The Wax Museum (WB ,1933)
Fulci passed away March 13,1996 from diabetes . Argento had the script reworked by Daniele Stroppa (who had worked on the screenplays for two of Fulci’s later films ,HOUSE OF CLOCKS(1989) and VOICE FROM BEYOND (1991) .How much the scripts  vary is unknown by this reviewer .
However ,to quote an interview with Massimo F Lavagnini (printed in DRACULINA # 24)
Fulci said: 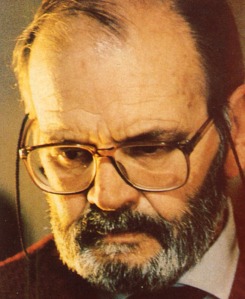 …. I think we start shooting in September. About the story, I can say it isn’t a carbon copy of the original HOUSE OF WAX, which obviously inspired us. Our story is settled in 1915 in Torino. The protagonist is a frustrated artist who kills and becomes a monster, because of the faults of society. …………..We have seven or eight ultra-violent scenes . *

Sergio Stivaletti, who had handled effects for Argento on PHENOMENA(1985,aka Creepers) ,OPERA(1987) and THE STENDAHL SYNDROME, as well as DEMONS(1985) and CEMETERY MAN (1994),stepped into the director’s chair . Having directed second unit for Argento, Bava, and Soavi, he had picked up a few pointers on how to director horror with style. Supposedly, Stivaletti, who had been preparing the films effects, had only two weeks’ prep time. If so, it makes the film even more impressive. 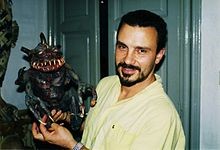 The film opens December 31,1900 in Paris (why does every room in Paris seem to look out upon the Eiffel Tower in movies?). However, the new year brings the discovery of a gruesome double homicide, and the police find that the only witness is a frightened 12 year old girl. 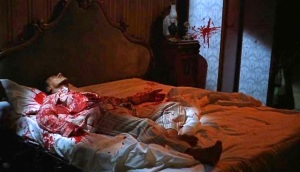 The film then jumps 12 years ahead to Rome. At a brothel, Luca (Daniele Auber, who also works in effects, later winning an Emmy in 2002 for Outstanding Makeup for a Miniseries, Movie or a Special (Prosthetic)) bets others there that he can spend the night in a newly opened Wax Museum which recreates some of history’s most notorious killings. The idea of spending the night in a spooky place seems to be lifted from CASTLE OF BLOOD(DANZA MACABRA,1964),showing that the filmmakers know their classic horror films. Sadly, it does not end well for Luca,who supposedly dies frightened to death.

Museum owner Boris Volkoff (the name a nod to Boris Karloff?)(portrayed by French actor Robert Hossein (THE BURGLARS/Le Casse,Columbia 1971)plans a series of new exhibits to exploit the press that the unfortunate death brings to the museum .

Volkoff, however, has a dark secret -he and his assistant Alex (Umberto Balli,who seems to have only done one other film)are creating their lifelike figures by capturing people and then injecting them to keep them alive and immobile under the wax! 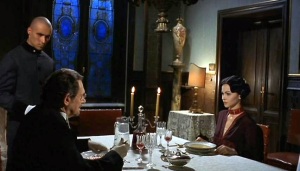 Volkoff hires Sonia (Romina Mondello, later in Harry Alan Towers’ DEATH, DECEIT, & DESTINY ABOARD THE ORIENT EXPRESS (2001)) to create costumes for the figures. Sonia however, happens to be young girl from the film’s opening, and the violent tableaux’s bring buried memories of her parents murder back. Luckily , Inspector Lavin (Aldo Massasso,later in Argento’s PHANTOM OF THE OPERA (1998) and SLEEPLESS( Non ho sonno ,2001))who had investigated the murders of Sonia’s parents is in Rome . With the help of Andrea( Riccardo Serventi Longhi,who appeared in the t.v. film CAVE OF THE GOLDEN ROSE 4 aka Fantaghio 4,1994,for Lamberto Bava) they start to see if they can uncover the mystery of the wax museum .

The ending is wildly delirious, and lurches into TERMINATOR (Hemdale,1984) territory. Up to then ,however, it is a gory tribute to older horror films with some marvelous effects (though the early CGI, in particular, the fire effects ,were not effective even when the film first came out). 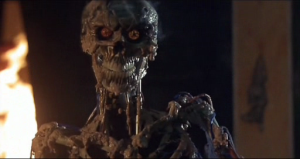 Reviews were for the most part positive  like this one :

(Variety April 20, 1997 )
Gothic horror is alive and kicking in “Wax Mask,” a luridly entertaining return to the style of Britain’s Hammer productions of the ’60s)

and the film appears to have done decent business throughout most of the world, but only garnering a token home video release via Image Entertainment a few years later. 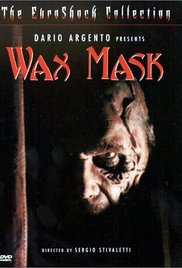 The French-Italian co-production looks stunning. From costumes to set designs, the film looks so much more expensive than it’s reported $1.25 million budget (though some estimates put it as high as $3 million). Adding to the sweep and grandeur is the magnificent orchestral score( with choir ) by Maurizio Abeni (who would also compose for Stivaletti’s THE THREE FACES OF TERROR (I tre volti del terrore,2004 ) . The English dubbing is good ,though some of the dialogue is a bit clunky. 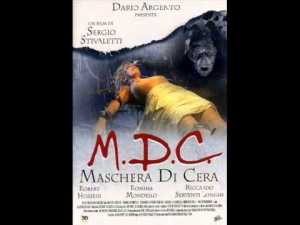 The original VHS/DVD releases back in 2000 had very muddy colors and a dark print ,and though Dolby mixed the sound was very flat .

Now One 7 Movies (whose DVD release of JESTER’S SUPPER we reviewed back in 2015 https://www.facebook.com/SCARLETreviews/posts/1584658468439774 ) have released WAX MASK in a glorious 1080p version in 1.85.1 (original aspect ratio) blu ray .The Dolby Digital 5.1 sound really lets the score fill your room ,and the sound effects are quite effective. Most impressive are the truly vibrant and rich colors and the clean almost three dimensional photography by Sergio Salvati (who shot many of Fulci’s as well as many Empire films produced by Charles Band). I cannot say how marvelous the transfer is and it puts many a major studios release to shame.
Extras on the disc include

–Backstage Scenes– some raw video behind the scene footage shot during the making of the film . It is a fun look at the cast and crew working and relaxing during the production. In Italian.

–Special Effects Scenes– the effects team working on the practical on set effects used throughout the film .At one point they get a package from Tom Savini ,and look through his makeup book GRAND ILLUSIONS(Imagine,1983).Producer Argento watches fascinated as they test a mechanical robot arm . In Italian .

If you are a fan of Italian Horror, this is a must get disc for you. Many fans may have head of the film but up to now may never have seen it. Now is your chance to scoop this film up.
Recommended!

*- DRACULINA issue 24 appears to be sold out but you can always see if some valuable issues turn up by visiting http://www.draculina.com/draculina2.html