MGM was undergoing another one of the spasms of change that it had been experiencing ever since Kirk Kerkorian got his hands on it in 1969.  After losing its distribution arm, they had been releasing their films through United Artists.  Ironically had also gotten involved with producing U.A. ‘s successful James Bond franchises The Bond films made money but not enough to keep both studios out of the red, so a variety of different people bought, stripped pieces away for resale, and then sold the studios once again. By 1990, Pathe and Giancarlo Parretti defaulted on loans, and French Bank Credit Lyonnais, to whom the studio had the biggest debt, took over.   The studio produced only ONE films that year, THE russia house(MGM was only involved with video distribution of MISERY, which was a Castle Rock/Columbia Production).

RUSSIA HOUSE was a film that harkened back to the intelligent spy thrillers that were made in the wake of the action packed James Bond films in the 1960s. Films like THE SPY WHO CAME IN FROM THE COLD (1965, Paramount) and THE IPCRESS FILE (1965, Rank/Universal) showed that spying was unglamorous and often deadly. 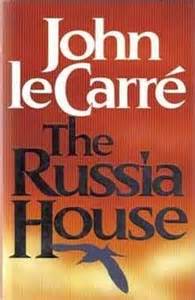 Based upon one of John LeCarre’s novels, THE RUSSIA HOUSE (Hodder & Stoughton, Uk, June 1, 1989), the film began production shortly after the book was published, being only the second American film to be filmed in the Soviet Union before its dissolution in 1991 (the first was RED HEAT (Tri-Star,1988).). Locations included Moscow, Leningrad, Lisbon, Portugal Vancouver, British Columbia and London. 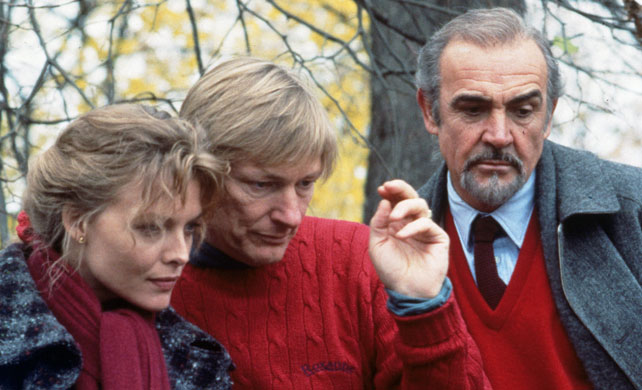 (the director and two of his stars )

Bond superstar Sean Connery plays Bartholomew “Barley” Scott-Blair (Connery, need I mention what he has done?), the head of a British publishing firm. When Katya (Michelle Pfeiffer (LADYHAWKE, WB,1985)), a young Soviet woman passes a package along to another book publisher, Nicky Landau (Nicholas Woodeson, recently in SKYFALL (MGM ,2012)) to deliver to “Barley”, Landau instead delivers it to British Secret Service. The “Russia House” is a nickname for a division of British Secret Service that focuses all their attention on Soviet activities.

The package, supposedly a book, is in fact a document detailing Soviet nuclear capacities.  “Barley” is intensely interrogated by British agents, including Ned (James Fox (KING RAT, Columbia,1965) and Walter (Director Ken Russell, a nice touch as he had directed the spy thriller MILLION DOLLAR BRAIN (U.A.,1967)). Interest is also aroused by the CIA in this document, and the British keep American Agents Russell (Roy Schneider) and Brady (John Mahoney) updated. “Barley” denies knowing Katya or why she would want to deliver such a document to him.

Eventually, the British agents decide to have “Barley “spy for them, and teach him what to say when he meets Tanya. They also want to know who or what the mystery man Dante (Klaus Maria Brandauer, who had co-starred with Connery   so brilliantly in NEVER SAY NEVER AGAIN (WB,1983)).

The cast is top notch, and all seem to relish their roles, though Ken Russell gets the choicest line: “You live in a free society; you have no choice. “

Well directed as always by the great Fred Schepisi (including the wonderfully moving ICEMAN(Universal,1984)as well as the delightful IT RUNS IN THE FAMILY (MGM,2003)), the film unfolds in a leisurely fashion, with each level a new question arises as to who is really the good guy and who can you trust?  The score by Jerry Goldsmith is an interesting mix of Russian music and jazz (at one point Connery joins in playing at a Russian jazz session), and never overpowers the story, but compliments the action.  The screenplay by Tom Stoppard (one of the co-screenwriters of BRAZIL, Universal,1985) is a good encapsulation of the novel, though some reviewers at the time of the film’s release felt that his dialogue was a bit clunky. 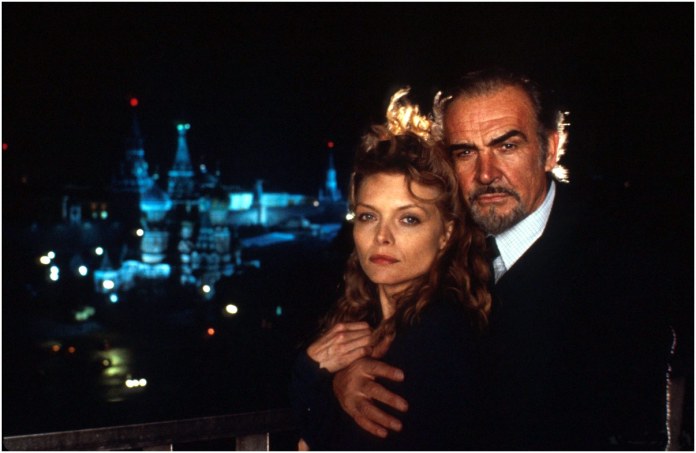 The film was a modest success upon its initial release on December 25,1990 (doing over $22,000 in domestic box office) as well as subsequent video and cable releases.

TWILIGHT TIME has once again done a magnificent job on their Region free (A, B, C) 1080p High Definition Blu Ray release. The film in its original video release seemed somewhat grainy and the colors somewhat muddy.  Here, the colors seem to reflect the environment around them (Lisbon has very bright colors, while the Russian sequences lean more to a gray scale). The sound (English 2.0DTS-HD) is quite lean and noise free, with dialog very easy to understand.    The English only subtitles follow the action and reflect the dialogue fairly accurately.

Extras are limited but interesting. There is BUILDING THE RUSSIA HOUSE, a behind the scenes featurette that was made during the movie’s production, with interviews by many of the cast and crew), the original theatrical trailer, and most entrancing, Jerry Goldsmith’s score on an isolated track. The music as released on an MCA cd back in 1990, but it if you do not have it in your collection, here is a good way to hear it. There is also once again a well written little booklet (by Twilight Time in house writer Julie Kirgo) that has a few interesting tidbits about Goldsmith’s reworked motif that had been dumped from two films!

This release, like so many of TWILIGHT TIME’s titles, is only available for a limited run of 3,000.  If you enjoy an intelligent spy thriller, add this to your collection. 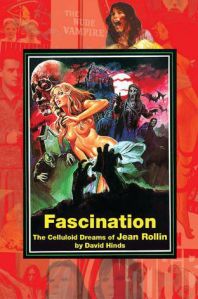 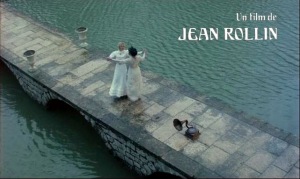 Jean Rollin was a surrealist filmmaker who became identified with the horror genre. While his films do indeed deal with vampires and the undead in various forms, they also have a lyrical dreamlike quality with imagery that would make Bunuel (with whom he once almost worked) proud. A vampire comes out of a grandfather clock forever frozen at midnight, a woman plays piano within a cemetery, recurring images of figures isolated on an empty beach, these are some of the haunting sights that are mixed in with a sense of loneliness for the preternatural figures within the films.

Before big budget films like INTERVIEW WITH A VAMPIRE (WB,1994), Rollin was mixing poetry, beauty along with violence and the need to kill the one you love to survive. Sadly, due to the violent reaction to his first full length feature*, Le Viol du Vampire (RAPE OF THE VAMPIRE, Les Films/ABC,1967), his films were considered not worth proper study and failed as both art house films as well as horror. Considering that that first feature was actually two separate films put together, the duality of his films (both art and horror, the use of twins, lookalikes, and parallel storylines) seemed organic for most of the remainder of his career.

I first heard of Rollin when I saw a full color photo of his wild poster for his third film, Le Frisson des Vampires/THE SHIVER OF THE VAMPIRES (Les Films/1970). It was a wild image, sexy, art deco-ish, and different from most of the film posters that I had ever seen before. I recall that at the time the book was dismissive of Rollin’s films, calling them dull. 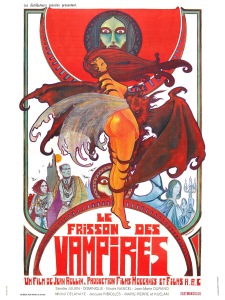 The first of his films that I actually saw was in a cut and poorly dubbed VHS release bowdlerization of his Requiem pour un Vampire/REQUIEM FOR A VAMPIRE(Les Films,1971) called CAGED VIRGINS (Boxoffice International Pictures (1973) shorn from 95 minutes to 65) . The dubbing I recall seemed very sloppy and made the film feel very cheap. The choppy editing to get to the good stuff (i.e. sex) also made the film seem like a cheapo horror.

However, it did give him connections, among them finding the beautiful Brigitte Lahaie, an adult film actress with great screen presence who was featured in several of his later films, to the advantage of both. Due to her popularity, people sought out any film that she was in, including Rollin’s work. Their best collaboration was the film FASCINATION (Comex/Les Films ABC ,1979) which has the very striking image of a shroud clad Lahaie wielding a very deadly scythe. Death had never looked more beautiful nor deadly.

Finally, there arose in England a group of film buffs who began to champion Rollin as a filmmaker to be reckoned with. Redemption UK distributed many a fine print of his works to a growing appreciative audience.

After a couple of action films for hire, as well as shooting some films that Jess Franco dropped out of(!), Rollin made several more personal fantastique films that were among his finest, garnering good reviews and appreciative audiences. What was little known, however, was that the filmmaker had long been ill, and created his movies while racing back and forth from hospitals.

He completed his last film, Le Masque de la Meduse /THE MASK OF MEDUSA (Les Films,2010) just shortly before he passed away, and it was a perfect film to end his career, as much of it mirrored his first feature, and also referenced many of his other creations.

HEADPRESS is to be commended for giving us this wonderful tome, FASCINATION: THE CELLULOID DREAMS OF JEAN ROLLIN by David Hinds, as it is probably the most definitive work on the filmmaker that we are likely to see for some time. The author has a great passion and love for the oeuvre of Rollin, having discovered him among the many Euro Horror filmmakers that were coming to the early video store markets in the early 1980s.

Hinds has done remarkable research, finding and seeing what still exists of much of the director’s work (a few shorts have gone missing, as well as some of his adult films). His descriptions of the films and the behind the scenes stories on their creation and distribution does what any great film book should -it makes you want to go out and see the films for yourself. 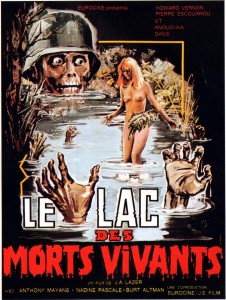 (One of his work for hire productions ,aka ZOMBIE LAKE ,1981)

Hinds has gone the extra step and reviewed the various video, DVD, and even Blu ray releases of these films, so you will know which is the best one to purchase.

He also sought out and interviewed several of the people involved with the films, including the fullest interview with the late director that I have ever read( and perhaps the last that the filmmaker ever gave).

The only quibble that I have is that for such a beautiful done tribute to Rollin, the photo reproductions are often muddy and very hard to see, resembling a reproduction of a newspaper photo from microfilm.  One wishes that they had tried a bit harder to show the haunting imagery in quality representation, perhaps putting them all in the center of the book on better paper, mixed in perhaps with some color.

If you are open to seeing and experiencing something beyond the often paint by numbers films that are hailed by our genre fans. Then by all means seek out this book and then see the films!

*-In 1968, rioting, occupations, and strikes were the norm in Paris it seems to everything. It’s hard now to believe film fans expecting a Hammer type film would react so violently, but given the time it was not so unusual an occurrence.

(“It is forbidden to forbid” -saying during 1968 protests, and apropos of Rollin’s work )