In 1959, Roger Corman and his brother Gene formed Filmgroup to make films that would give them a bigger cut of the profits of the films that they were making (Roger had formed Palo Alto Productions to produce his first films). They distributed a few of the films but decided they need Allied Artists and American International Pictures to get them a wider distribution in the long run. Finally, the Corman’s decided to fold Filmgroup. The Corman’s never bothered to copyright the films they made for and distributed by Filmgroup (they had bought some foreign adventure and fantasy films which they also distributed or represented under the banner), and so all of these titles have fallen into Public Domain status.
This is why films like QUEEN OF BLOOD (1966), THE LITTLE SHOP OF HORRORS (1960), and NIGHT TIDE (1961) have been widely distributed by many fly by night video distribution companies using prints of questionable sound and picture quality.

In this batch of P.D. films were also THE TERROR (1963). This one seemed to appear in a lot more of the bargain bins due to the fact that
a)-it had recognizable star names (Karloff, Nicholson)
b)- it was color.
The problem is a lot of these budget videos and later DVDs were from 16mm dupe prints, and were often splicy and muddy color and sound. Since it was so long available in this fashion, studios try and stay away from releasing better prints because they fear the average buyer is unaware of the differences in quality.

Therefore, it is a pleasure to say that FILM DETECTIVE has gone that extra step to find original 35mm elements to release a Blu Ray that makes the film look as if it was lensed recently. 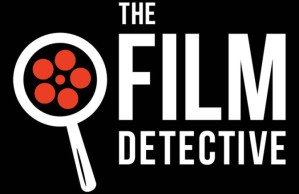 Legend has it that as Corman was finishing his A.I.P. film THE RAVEN (1963) a few days ahead of schedule, the director realized he Still had Boris Karloff contractually signed for four more days to work, as well as having some impressive standing sets left over from previous films (kudos of the great Daniel Haller, Corman’s answer to Hammer’s brilliant set designer Bernard Robinson). He had writers Jack Hill and Leo Gordon cobble something together to utilize the star and the sets. Corman was known for shooting his films quickly, including THE LITTLE SHOP OF HORRORS (1960) over two days and one night. He finished Karloff’s scenes in the required four days *

The film, (known during shooting as “Lady of The Shadows”) however, was not quite complete, and like a Frankenstein monster, it was patched together with new scenes over a 9-month period with various (uncredited) directors such as 26-year-old actor Jack Nicholson, Jack Hill, Monte Hellman and Francis Ford Coppola, and I am sure several others did pick up shots. **

The plot has Lt. Andre Duvalier (Jack Nicholson, who had played Peter Lorre’s nebbish son in THE RAVEN that same year) a soldier in Napoleon’s army who has been separated from his regiment (with Big Sur California substituting for undetermined Prussian territory.)

Exhausted and hungry, he is surprised to see a beautiful woman named Helene (Sandra Knight, Nicholson’s wife at the time). She shows him a source of fresh water then has him follow her. Suddenly she begins to walk as if in a trance into the ocean. Andre tries to rush in and save her when he is attacked by a falcon and sinks under the waves (Nicholson claimed that he nearly drowned filming this sequence). 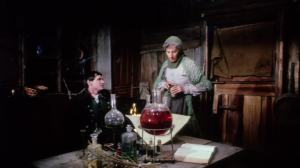 He awakes in the home of Katrina (Dorothy Neumann) and her mute servant Gustav (Corman regular Jonathan Haze). When Andre inquires about the Helene, the old woman shows him her pet, the very bird that attacked him, also named Helene. Andre awakes at night and goes off looking for the girl, eventually finding her in the forest. Silently she leads him through the woods when suddenly Gustav appears, and says there is danger (a continuity error, as hadn’t we just been told he was mute?). Tossing a rock, he shows that the girl was leading him to a quicksand trap. Gustav, in a harsh whispery voice says that Helene is possessed but if the soldier wants to find her, to go to the castle of Baron Von Leppe and find Eric who knows the full story.

Andre confronts Katrina, who tries to stop him from going to the castle, then pleads that he not tell the Baron that he knows of her whereabouts. 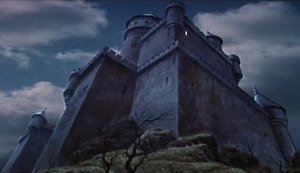 He comes upon the castle (impressive matte paintings by Albert Whitlock, lifted from THE PIT & THE PENDULUM(A.I.P.,1961)) and he spies Helene in windows. Andre demands to be admitted “In The Name of the Government of France”. He is greeted by Baron Victor von Leppe (Boris Karloff) himself, who says that he was at his devotions and did not hear earlier.

Karloff is superb in his role, alternately haughty as well as subtly humorous. Considering that he didn’t have a full script makes his performance all the more impressive. 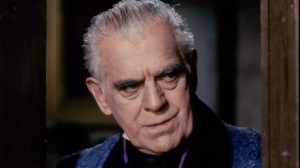 The Baron admits the soldier, noting that the name Duvalier was once of a noble house until the French Revolution. Andre admits his father was the Count Duvalier, until he lost his head (the film seems set in 1806, so his father was executed between 1793-94). He says that he saw the girl in one of the windows but the Baron says he is mistaken. He points out a painting of a young woman (by artist Bert Schoneberg) and the soldier says that it is a portrait of the woman whom he is seeking. The Baron asks him to observe the date of the painting, which is 1786. It is a portrait of the Baron’s late wife, Ilsa. The Baron says that the castle is unoccupied except for the Baron and his servant Stefan (the ever reliable Dick Miller, billed here as Richard and giving a subtler performance than usual) and that Andre is the first visitor to the castle since the turn of the century.

Duvalier wanders the castle grounds and cellars, finding the crypt of Ilsa, which has ominously had its cross removed from above the entrance. He is startled at one doorway by the appearance of Helene (or is it the spirit of Ilsa) who when he looks back has gone. 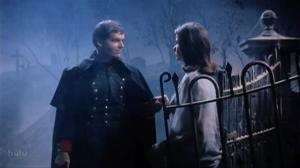 It seems Stefan followed Andre during his search and tells the Baron that the soldier may have heard things in the village. The Baron feels Andre must leave as soon as possible but under his own accord due to his rank and position. Stefan confronts Andre at the Baroness’ crypt, telling him that the Baron removed all religious articles when she died and that the crypt has been sealed for 20 years. He also tells him that the soldier’s horse has bolted and run away. Andre feels he is being lied to and asks who is Eric?

Dark secrets come out about who Eric is, and how the Baron’s wife died, plus a tale of revenge and the hidden tale of how  Katrina is involved. It all ends with gory murder (a character gets his eyes clawed out by the falcon in a for the time graphic fashion and falls to his death) and the castle falling into ruin (this time by flooding as a change of pace from the usual fire that ended Corman’s Poe films) and a character rotting away before our eyes (the putrefaction effect, uncredited seems similar to that of Vincent Price melting in the previous year’s TALES OF TERROR (A.I.P.,1962) makes me feel that it was by Lou LaCava).

The picture quality on this FILM DETECTIVE Blu Ray release is superb. The blues and reds in the Pathe color print are incredibly vibrant, shaming the current trend of shooting in drab metallic tones. This release truly shows off the superb cinematography of John M Nickolaus Jr and the uncredited Floyd Crosby. Wide shots and two are employed throughout, with close-ups used powerfully and sparingly. The clearer picture also clearly shows when stuntman Dennis Jakob, with dark hair, substituted for Karloff in the climatic flooding sequence. Still, the flooding sequence must have been a great strain on the 76-year-old star, who would later develop pneumonia filming in the cold sound stages of Italy for BLACK SABBATH(AIP,1964). Also, we can see near the end that Sandra Knight’s mid drift is blurred, due to the fact that she was pregnant during filming (giving birth to daughter Jennifer September 13,1963). 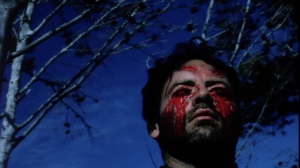 Harry Reif’s set decorations give the production a lot of value. The costumes by Marjorie Corso are simple but effective (especially nice is the uniform worn by Nicholson as well as the rich blue robe worn by Karloff). Kudos to editor Stuart O’Brien on assembling so many disparate scenes and making a somewhat cohesive whole. The mono sound is very good (though a bit low on certain dialogue sequences, easily corrected by adjusting the volume). The score by Ronald Stein (with some additional bits by Lex Baxter) is lush and effective. All of these technicians and artists make THE TERROR look a lot more lavish and expensive than it is. Subtitles for the dialogue are excellent. 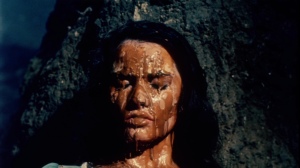 The only quibble I have is that I wish that they had gotten someone like David J Skal or Tim Lucas to do an audio commentary for the film. One of the things that DVDs and Blu Rays offer that streaming does not allow are extras like that, and companies should use that for their advantage.

IMDB lists a running time of 81 minutes, though this disc runs 79 minutes 14 seconds. I see nothing that would be cut nor any time compression. During the film’s original U.K. release, the bloody eye scene was trimmed, but this print seems to be complete.

All in all, Film Detective is to be commended for the loving care with which they have restored this film. 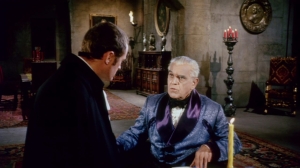 *-Karloff’s salary included a $15,000 deferred payment that he would receive once the movie made over a certain amount. In May 1966, Corman told the Horror Icon that THE TERROR never hit the profit threshold, and so the star would not be getting any money. However, he said he WOULD pay the actor the $15,000 if he worked a few days on another project. The star agreed (today there would have been lawsuits galore) to the undetermined future film. Luckily, it turned out to be TARGETS (Paramount,1968), Peter Bogdanovich’s first full feature debut. The film made extensive use of clips from THE TERROR.

Other films have used clips from the film, including CAMPFIRE TALES (Sub Rosa,1991), AVENGED (Uncork’d ,2014), and TRANSYLVANIA TWIST (Concorde ,1989). In the latter film, a sort of AIRPLANE! (Paramount,1980) for horror fans, Dexter Ward (Steve Altman), enters a room and encounters Karloff courtesy of footage from THE TERROR. This is a doubly clever idea, considering the piecemeal way that the Corman film was made.

**- Corman tried to regain copyright on the film in 1990 for release through his New
Horizon -Concorde company. To do this, he rehired Dick Miller 27 years later to film new footage for the beginning and the end of the film as a framing device. Miller claimed that the payment for these scenes was the most he ever got from Roger Corman! Sadly,I have been unable to find this version on VHS or DVD.

(In the U.K.,the film was also known as THE HAUNTING . Confusing to say the least ,as there was also the THE HAUNTING (MGM ,1963) .