Back in the early 1980s, horror films were massive money makers. For relatively low costs, filmmakers of various skills could get a camera, an effects person, and maybe some women willing to shed their clothes, and even the feeblest efforts could get a theatrical release. 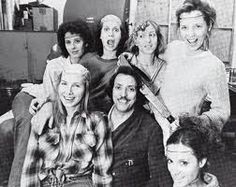 Then there were films that were done with the same miniscule budgets but with a bit more skill, darker tone perhaps, better actors, direction, and technical skills

MANIAC falls into that latter category. The film was inspired by the infamous Son of Sam. David Berkowitz began his wave of terror that terrorized the city of New York on Christmas Eve ,1975 with what was at first were considered random stabbings. 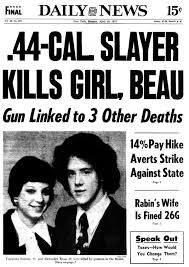 His first murder (and first use of his weapon of choice, a .44 calibre, thus his being dubbed at first the .44 Calibre Killer) was on July 29,1976. He finally was arrested on August 7,1977 after avoiding the biggest manhunt in NYC history, sending taunting letters to both the police and the press, having killed six people and wounded seven others by July 1977. When apprehended, he confessed but adding he was being ordered to telepathically by his neighbor Sam’s dog Harvey (thus, the ”son” of Sam.). Later ,he admitted he made up the dog story, but the legend continues.

When people found out that publishers were offering huge sums of money for his story, the Son of Sam Law, which was designed to keep criminals from further profiting from their crimes.

This did not stop newspapers, book publishers, television shows ,and even movies from cranking out their own money making attempts to exploit the story , one of the earliest is the nearly unwatchable ANOTHER SON OF SAM (1977, which began in 1975 as a cheapie called HOSTAGES ).

Filmmaker William Lustig had grown up enjoying the exploitation smorgasbord offered up in the 1950s,60s and 70s that played in the grindhouses of 42nd Street. After taking some film classes, he found work on both mainstream film (as a P.A. on DEATH WISH,Paramount,1974) before moving into the profitable adult film market, where he worked as editor, producer, and director (and probably a lot of other jobs too) .

He saw the money that films like FRIDAY THE 13th (Paramount ,1980) were making ,and thus, taking his share of his latest adult title , he decided to make his own horror movie.

He was wise enough to get the wizard who created the effects that had made FRIDAY THE 13TH so memorable, namely Tom Savini . Lustig also cast actor Joe Spinell, who also co-produced ad co wrote the script. Spinell was a hard- working character actor who had worked in supporting roles in major films but this would be his first starring role. Finally, they hired actress Caroline Munro (after their first choice had dropped out), who had starred in several horror and fantasy films throughout the 1970s, as well as being featured in major films like THE SPY WHO LOVED ME ,U.A.,1977).

The film is a gritty time capsule of New York City. Tourists were afraid to come to the city, never mind walk the streets at night. Hookers, pimps and drug dealers stood aside sleazy motels and grind house movie theatres, trying to lure in the unwary to sample their wares – or simply rob them.

Cinematographer Robert Lindsay, who had worked with Lustig on his previous adult movies, perfectly captures that sense of dread and moral decay.

Frank Zito (a completely believable full on psycho performance by Joe Spinell) wanders the city and kills young women who he is aroused by, then scalping them and then taking his bloody souvenir home and attaching it to one of the many mannikins he has littering his apartment. It seems that he was abused as a child by his hooker mom and so he finds that beauty is punishable by death.

One couple is killed in their car when Frank jumps upon the hood of the vehicle and point- blank fires a double- barreled shotgun blast into the passenger (Tom Savini, who not only played the victim, but used his own sculpted head to blow apart. Savini also doubled for Frank and used an actual shotgun to blow up the sculpture, having the odd honor of shooting himself on camera! Since they did not have permits, Savini then tossed the gun into a waiting truck and was driven away in case of police investigating the reports of gunfire) before killing the young woman also in the vehicle.

Frank talks to his mannequins and sobs and wails when he sees the coverage of his latest murders upon his television. He is truly Norman Bates on speed in this film. Still, Spinell, while creepy and often veering dangerously close to overacting, never loses a sense of reality in his portrayal.)

Somehow, he meets a beautiful photographer, Anna (Caroline Munro), after she takes his photo. They oddly become friendly while Frank continues his killing spree, killing a nurse as well as one of Anna’s models, adding their scalps to his growing collection. Frank is starting to lose the small grip that he has on reality, for when he kills the mode, he first begins talking to her as his deceased mother.

Still, Anna goes out with Frank, stopping off at the graveyard where his mother was buried. Frank finally attacks Anna, but she bashes him with a shovel and escape. He tries to pursue her but suddenly imagines that his mother is rising from her grave. Terrified, he flees home. His apartment proves no safe sanctuary , however , as the mannequins come alive and throw him onto his bed, where they tear his head from his body!

The film has been a constant for collectors ever since VHS was the market staple.

This new BLU RAY is the must have version for collectors.

The movie is in its original aspect ratio of 1.85:1 with a magnificent 4k 1080p transfer. For a low budget film, the film has some superb cinematography, and this release does justice to its color photography. What is more amazing is when you realize the film was shot in 16mm and then blown up to 35mm. For decades, the original 16mm negatives were missing but now, they have been found. Prior prints were from a 35mm dupe, with all the inherit flaws that involves. The original camera negative used here seems less grainy (save for the usual grain of the format) and increases the sharpness of the images. 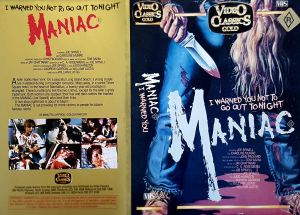 Comparing it to an old DVD release, the sharper clarity is so easy to see.

The original film was one of the first indies to use Dolby Stereo, but this release makes full use of the process. I heard no pops or hiss on the soundtrack, and the music, dialogue and sound effects are clear and make good use of the separate speakers on my system. I only listened to the 2.0 DTS-HD track, but you are offered the choice also of Dolby Digital 2.0 (which perhaps would reflect the original release sound) as well as 7.1 DTS-HD.

That would be more than enough for most major studio releases, but BLUE UNDERGROUND has piled on the extras to truly make this a special collectible 3- Disc Edition.

On the first disc, along with the film, we get a running audio commentary with Lustig and Producer Andrew W. Garroni. This is a newly recorded commentary full of little insights as well as the how well the film holds up 38 years (!) later.

Also on the first disc is a second commentary track lifted from the previous 2007 DVD release from Blue Underground. On this track are Lustig, Tom Savini , film editor Lorenzo Marinelli and Joe Spinell’s assistant Luke Walter (Spinell sadly dying way too early in 1989 ,at age 52). There are a lot of fond memories and humor as well as technical details on the making of the film.

This first disc also has the original Theatrical trailer, as well as tv and radio spots. One wonders if trailers such as this which show such graphic violence could be shown nowadays https://www.youtube.com/watch?v=Ya7lVHk-qD8 .

Where else would you hear CALIGULA (Penthouse /1979) and MANIAC in the same sentence? https://www.youtube.com/watch?v=TCCsMzpBQqA

Disc Two
There are several more extras that fill this second disc. The first two are newly made especially for this release. The others are ported over from the MANIAC 30th Anniversary of 2010 or previous DVD releases.

OUTTAKES- rough footage and alternate takes give a glimpse of the behind the scenes making of MANIAC. The outtakes are not restored nor cleaned up and thus seem a bit more grainy but are a treat nonetheless.

RETURNING TO THE SCENE OF THE CRIME- on camera interview with William Lustig.
He talks about the making of the film with an obvious pride and enthusiasm.

ANNA & THE KILLER- Caroline Munro talks about her career and working on this flick as well as other films with Spinell .

THE DEATH DEALER- Tom Savini (who else?) Always fun to see and hear Tom talk about his magic.

DARK NOTES- Composer Jay Chattaway talks about this Jazz Musician came about getting his first film score and how he tried to get into the head of a psychopath to create his score.

MANIAC MEN -Michael Sembello and Dennis Matkosky discuss the song that the film inspired and later popularized in the Paramount film FLASHDANCE (1983).

THE JOE SPINNELL STORY- this is ,for me ,the highlight of the extras as this nearly an hour long documentary covers the actor’s life with personal memories , home movies and appearances on ‘The Joe Franklin Show”. Success seemed to have hurt Spinnell and been somewhat responsible for his early demise. (Copyright-2001).

MR ROBBIE: MANIAC 2 PROMO REEL– Buddy (COMBAT SHOCK, Troma ,1986) Giovinazzo had planned a warped sequel of sorts, with Spinell as a children’s show host with a disturbing secret. Imagine Spinell as Krusty The Clown and you can imagine how warped that it is. They never were able to raise the funds.

PUBLICITY – featurette. Interviews with the cast and crew.

MANIAC CONTROVERSY – Like SNUFF (Monarch,1975) before it, the filmmakers used the complaints and horrific reactions to the film to get the curious into the cinemas and see what all the fuss was about. Unlike SNUFF, they got a powerful that wasn’t just hype.

Third Disc- MANIAC original Motion Picture Soundtrack cd. This is a big bonus, as the soundtrack by itself sells for about $20 at least at horror conventions.

The film is to this day very hard to watch for many, due to its gritty atmosphere which captures the sense of NYC at the time , as well as it’s still powerful effects .It also does have a strong sense of misogyny that is hard to ignore but it does also capture the mind set of the character. Joe Spinell’s daring performance both repels us while he fascinates us, lifting the feature above the other stalk and slash films of the era.

Before Alek Minassian killed 10 people, the majority of them women, by driving his van into pedestrians on a Toronto street Monday, he posted on Facebook praising mass murderer Elliot Rodger and called for an “Incel Rebellion,” an uprising of men who are angry women won’t have sex with them.

Perhaps MANIAC was predicting a movement, a hidden dark secret, that we back then could not even imagine??

Kudos to BLUE UNDERGROUND for this super -deluxe must have 3-disc collector’s edition.

Have a book, cd, film, play ,etc you wished reviewed here? Or a contest giveaway ? Want to submit art for articles or articles ?? Email : Scarletthefilmmag@yahoo.com

NOTE : We cannot guarantee we will be able to use any submitted reviews, articles, or be able to guarantee reviewing all material sent to us, but we try very hard.